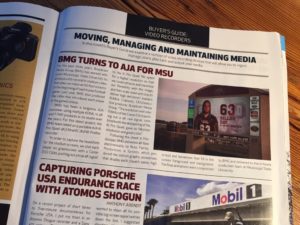 BMG has been a longtime AJA customer, using multiple KONA, Io 4K and T-TAP products in its studio over the years. For this latest project, the BMG team relied heavily on a portable AJA Ki Pro Quad 4K/UltraHD 2K/HD ProRes recorder.

“In order to capture the headshots for the stadium screens, we shot each player on green screen with a Canon C500, pushing out a true 4K signal to the Ki Pro Quad. We opted for a higher resolution, so that we could reframe and maximize our flexibility with the image, and then scale down and crop to deliver high-definition,” said Robbie Coblentz, CEO/Executive Producer, Broadcast Media Group. “The resolution and color fidelity of the Canon C500 pushing out a 4K Raw signal, combined with the debayering of the Ki Pro Quad, gave us fabulous resolution and great color.”

The production process started with BMG’s shoot in Mississippi. They delivered 4K files from the shoot electronically to Russ Fairley Productions, Inc. in Toronto, Canada, who produced the motion graphic animations that display each player’s name, high school and hometown, which fill in the screen foreground and background. The final animations were composited by BMG and delivered to the in-house production team at Mississippi State University. As the football lineup changes week to week, MSU would combine the player clips in various configurations. Since the players’ schedules are limited, another benefit of capturing their video headshots in 4K to Ki Pro Quad was having high enough resolution and image fidelity to isolate single frames that could possibly be used for web and print purposes.